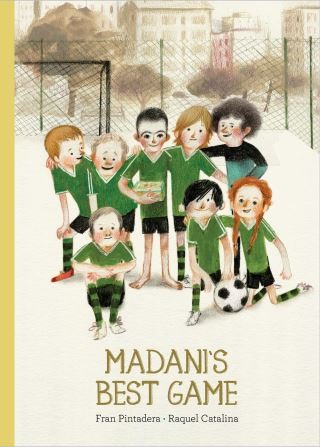 A heartfelt book featuring a neighborhood soccer team and its determined young star, who has a secret plan even more impressive than his bicycle kicks.

No one plays soccer like Madani. When the ball lands on his bare feet, the whole town stops to watch. Even Madani’s mother—still sewing the day’s work at home—can hear the crowds cheer when he scores. His teammates wonder what their best player could do, if he only had a proper pair of cleats. As Madani saves up money, bit by bit, his team’s rivalry match approaches. Maybe he’ll have new cleats in time for the big day! Or maybe Madani has a different goal in mind…

Told with gentle humor and lively illustrations, Madani’s Best Game is a refreshing story about the joys of sports, teamwork, and family.

Fran Pintadera:
Fran Pintadera is a storyteller, theater director, and the author of over a dozen children's books. Why Do We Cry? (Kids Can) received a Parents' Choice Gold Award and was selected as a Bank Street College Best Book of the Year. Madani's Best Game is based on Fran's time as a social educator in new immigrant housing, where he often played pick-up soccer with a boy named Madani and his friends. Fran lives in Spain. Follow him on Instagram @franpintadera.