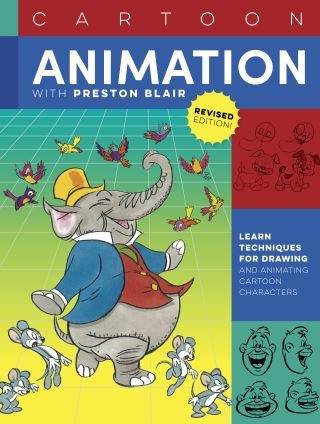 Learn from a master animator how to bring your cartoons to life through movement with Cartoon Animation with Preston Blair.

Preston Blair: Preston Blair (1910–1995) was a native Californian who studied art at the Otis Art Institute, as well as illustration under Pruett Carter at Chouinard Art Institute (now California Institute of the Arts). As a member of the California Watercolor Society and the American Watercolor Society in New York, he exhibited work all over the country. Preston was a fine artist during the early days of full-length feature animation. For the Disney production Fantasia, he designed and animated the hippos in "The Dance of the Hours." He also animated Mickey Mouse in The Sorcerer's Apprentice, portions of the classic film Pinocchio, and the famous scene in Bambi when the owl talks about love in his "twitterpated" speech. At MGM, Preston directed Barney Bear short films, and he was well known as the designer and animator of one of Tex Avery's epic shorts Red Hot Riding Hood. Preston later moved to Connecticut, where he produced television commercials, educational films, and cartoons, including TheFlintstones. Before he passed away, he worked as an inventor of interactive TV programs, such as teaching reading through animation and virtual reality games featuring full-sized animated opponents.