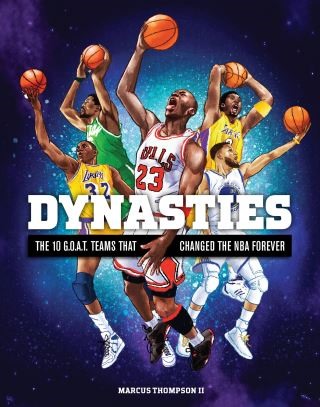 The 10 G.O.A.T. Teams That Changed the NBA Forever

Acclaimed sports journalist Marcus Thompson explores the 10 teams that transformed basketball in this illustrated history of the sport.
What turns a winning team into a dynasty? According to many, legitimate dynasties are teams that not only won two or more titles but combine personality, superstar talent, and consistent winning seasons. They are teams that you either love or love to hate.

While basketball dynasties have been talked about in sports media circles-especially over the last few months-there isn't been a book that explores these top teams in basketball history. Dynasties features 10 winning teams that redefined the sport in their own way. Organized by dynasty beginning with the Minnesota Lakers (1948-1954) and ending with the Warriors (2015-the present), the book tells the story of each team with player and coach profiles (including some of the sports all-time greats: Johnson, Bird, Jordan, Abdul-Jabbar, O'Neal, Curry), key games, playing styles and tactics, controversies, and more. Also featured are teams and players that were frequent rivals to dynasty teams (such as LeBron James and the Cleveland Cavaliers), teams that could have been dynasties, and possible future dynasties.

Marcus Thompson II: Marcus Thompson II is a lead columnist at The Athletic known for his writing on Bay Area pro sports, especially the Golden State Warriors and the NBA at large. With more than twenty years’ experience, he has developed a respected voice in the industry through his storytelling, ability to connect with athletes, and unique perspective. He is the author of the national bestseller Golden: The Miraculous Rise of Steph Curry and KD: Kevin Durant’s Relentless Pursuit to Be the Greatest. The Clark Atlanta University product lives with his wife, Dawn, and daughter, Sharon, in Oakland, California.