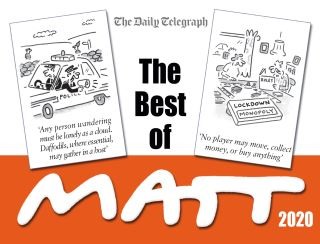 The funniest and best from the Cartoonist of the Year

The last twelve months seen through the eyes of the brilliantly funny cartoonist Matt - the perfect Christmas gift.
This year has certainly been a challenge . . .
From 'unprecedented' to 'furlough', 'lockdown' to 'who even remembers Brexit', Matt is always there with exactly the right brilliantly uplifting take on the world.

There is no doubt: award-winning Matt definitely makes the world a happier place!

Matt Pritchett: Matthew Pritchett studied at St Martin's School of Art in London and first saw himself published in the New Statesman during one of its rare lapses from high seriousness. He has been the Daily Telegraph's front-page pocket cartoonist since 1988. He has won numerous awards, often multiple times, including the Cartoon Arts Trust Award, What the Papers Say Cartoonist of the Year and UK Press Gazette Cartoonist of the Year. In 2002 he received an MBE.